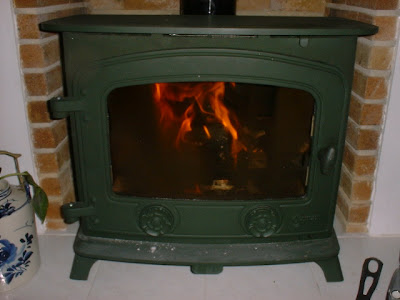 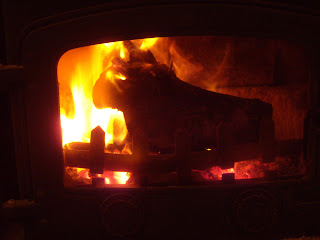 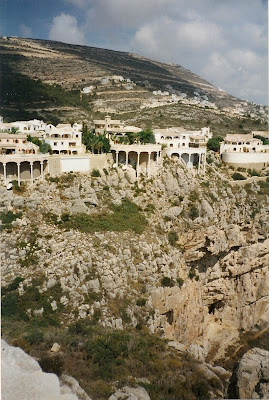 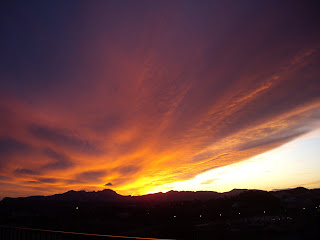 If you enjoy what you see and read on a blog, then you can arrange to have notice of updates sent to you by becoming a FOLLOWER. Look for this word in the right hand column of the blog. Following a blog can be public (your name or user name plus a photo if you like) or it can be completely anonymous - the association is known only to you.

Being a Follower openly tells the world and the author that you are interested in the content and encourages others to read the blog.

You can easily cancel any choices at any time by selecting to do so on the blog.

Posted by Halvenon at 23:04 No comments: 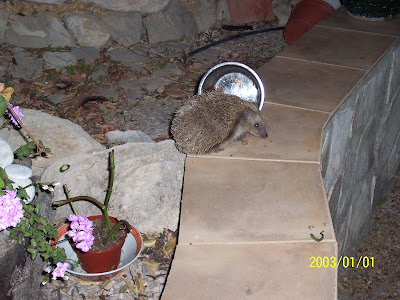 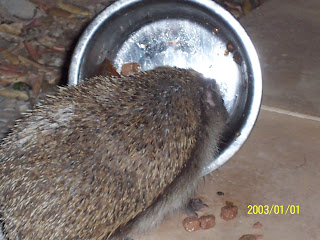 ................used to bring us out of the house to watch. He was certainly not discreet. The photos on these pages were taken 5 years ago on New Year's morning as Hercules celebrated by emptying the cats' bowl specially refilled for him. Sadly neither he nor any of his clanking clan have appeared so far this winter.
Come back Hercules and progeny in 2009, we'll keep on filling the bowl. To hell with the recession!

Please look at the first blog in January for the first mention and more photos of the hedgehogs.
(In Archive, near the top in the righthand column of the blog page) 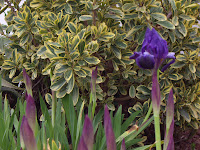 Good old Iris, the first this year, January 28th.
Posted by Halvenon at 18:18 No comments: 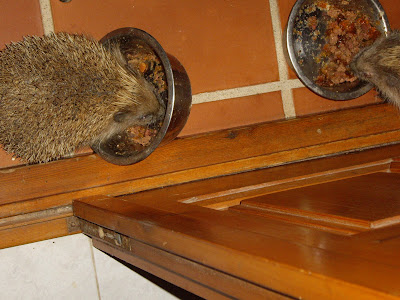 The photos were taken immediately outside the patio doors leading to the main room of the house. The hedgehogs had got so used to us by this time last winter that they would come here to feed from the cats' bowls. They were so confident or hungry that I was able to open the door and take the photo looking down on them.

The feeding hedgehogs phenomenon began about 5 years ago. The cats' bowls were at the far side of the terrace from the house. The technique of the night prowler was to put its front feet in the bowl so as to tip the food towards its snout. At night we would hear a clatter as the metal bowl fell back flat on the tiles as the hedgehog moved its front feet. 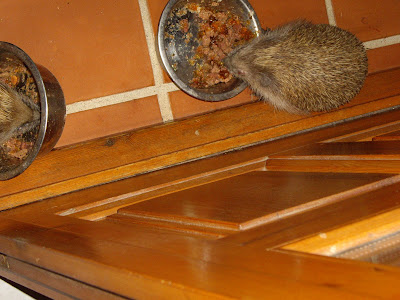 At first we noticed only one hedgehog whom we called Hercules. When we came out of the house having heard the clatter of a bowl Hercules would scuttle briskly away after pausing for just another mouthful. As the years went by Hercules acquired either a double or a partner or a much larger appetite.
Then two hedghogs appeared at the same time to feed together. It was a partner! Our cats just cleared off or watched from a distance.

Night after night at its peak in the winter months......clatter, clatter, went the bowl and outside we would go to see the fun. Sometimes I would remember my camera. 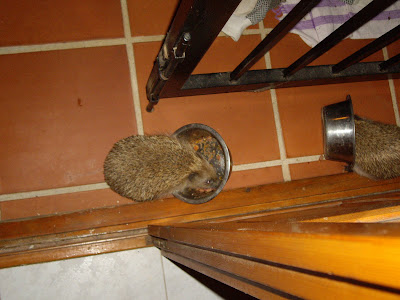 One night, returning home by car, we caught Hercules outside the garden scuttling along by the wall at a rapid rate to get out of the headlights and through the spaces of the garden gate.

He had quite a turn of speed, seeking cover out of the headlights' glare.

We await the return of the Hercules + this winter hoping they are still around.

But what did I see last Sunday night on the terrace as I went out to get logs for the stove? A fox.
Posted by Halvenon at 19:53 No comments: